Berserk: The Golden Age Arc II - The Battle for Doldrey

Be the first to write a review
Tweet
$29.95
Three years after joining the Band of the Hawk, Guts is shocked to hear Griffith's words. He believed that his mission was to pursue Griffith's dream together with him through all the fierce battles and struggles. In order to become an equal to Griffith, Guts decides to leave the Band of the Hawk. Around the same time, the Hundred Years War between the Midland Kingdom and the Empire of Chuder enters its final stage. Midland's elite force, the White Tigers, attempts to take the impenetrable Fortress of Doldrey but is confronted and annihilated by the Holy Purple Rhino Knights led by Chuder's strongest general, Boscogn. Seeing this as a perfect opportunity for his Band of the Hawk to advance, Griffith proposes to the King of Midland to send only his Hawks into the battle to capture the infamous fortress. Guts decides to make this battle his last with Griffith and leave the Band of the Hawk.

Be the first to review Berserk: The Golden Age Arc II - The Battle for Doldrey. 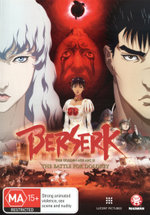 Berserk: The Golden Age Arc II - The Battle for Doldrey

Anime Anime
Hold on while we process your request.