Be the first to write a review
Tweet
$19.95
DISC ONE: THEATRICAL VERSION: (With commentary by Richard Kelly, Drew Barrymore and cast and crew): Donnie Darko is a disturbed adolescent from a semi-functional, upper-middle class family, gifted with a sharp intellect and vivid imagination--but he's also a bit weird. Donnie's off his medication and when his bedroom is obliterated by a falling airline engine, he becomes increasingly delusional and convinced the world will end in 28 days. Aided by an imaginary friend, he embarks on an increasingly crazed series of actions, which horrify his teachers, scare his parents and amaze his friends.

DISC TWO: DIRECTOR'S CUT: (With commentary by Richard Kelly and Kevin Smith): "I have re-assembled the film with some deleted scenes familiar to fans, and others that have been kept secret. The sound and picture have been completely re-mastered, with new visual effects sequences resurrected from blueprints only dreamed of years before. There are surprises in store for everyone; even those most familiar with the film. The mysteries of the Tangent Universe are about to be unveiled". Richard Kelly, Director

Be the first to review Donnie Darko: 15th Anniversary Edition. 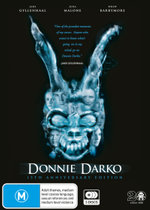 Science Fiction Drama
Hold on while we process your request.