by Rob Cohen, John Singleton, Various Others, Ludacris,  Vin Diesel and others

THE FAST AND THE FURIOUS: They've got the adrenaline rush and the mean machines, but most of all, they've got the extreme need for speed. On the turbo-charged streets of Los Angeles, every night is a championship race. With nitro-boosted fury, Dominic Toretto (Vin Diesel), rules the road turning all his challengers into dust. He and his rival, Johnny Tran (Rick Yune) are the boldest, the baddest and the best. But now, there's new rage on the road. They know he's tough, they know he's fast, but what they don't know is that he's a speed demon detective (Paul Walker) with enough drive and determination to come out the winner. With intense full-throttle action, awesome high-speed stunts, and full-on pedal to the metal intensity, this fast and furious assault puts you in the driver's seat and dares you to exceed all limits.

2 FAST 2 FURIOUS: Supercharged street-racing action exploding onto the streets of Miami. Incredible cars driven to the edge. Beautiful girls and a lifestyle to die for... It's 2 Fast 2 Furious. Academy Award nominated director John Singleton (Boys N Da Hood) brings you the nitrous-injected follow up to The Fast and the Furious. Brian O'Conner (Paul Walker) has lost his job after letting his friend Dom Toretto, a street-racing crime boss, escape the law. Now he's back in Miami with his old friend, Roman Pearce (Tyrese). He's working undercover for the cops to avoid punishment for his actions. He's helping the gorgeous Monica Fuentes (Eva Mendes) track down a shady businessman. And he's racing again - this time it's for his life

THE FAST AND THE FURIOUS: TOKYO DRIFT: From the makers of The Fast and the Furious and 2 Fast 2 Furious comes the highest-octane third installment of the hit movie franchise built for speed! When convicted street racer Sean Boswell (Lucas Black) tries to start a new life on the other side of the world, his obsession with racing sets him on a collision course with the Japanese underworld. To survive, he will have to master drifting - a new style of racing where tricked-out cars slide through hairpin turns, defying gravity and death for the ultimate road rush. With more mind-blowing stunts and heart-pounding racing sequences than ever, The Fast and the Furious: Tokyo Drift puts you in the driver's seat.

FAST AND FURIOUS 4: Heading back to the streets where it all began, Vin Diesel and Paul Walker rejoin Michelle Rodriguez and Jordana Brewster to blast muscle, tuner and exotic cars across Los Angeles and through the Mexican desert in this new high-octane action-thriller. When a crime brings them back to L.A, fugitive ex-con Dom Toretto (Diesel) reignites his feud with agent Brian O'Conner (Walker). But as they are forced to confront a shared enemy, they find the best way to get revenge: push the limits of what's possible behind the wheel!

FAST AND FURIOUS 5: Vin Diesel, Paul Walker and Dwayne Johnson lead this all-star all-action movie with outrageous stunts, incredible cars and beautiful girls that pushes the limits into the red and beyond! The legendary Dom Toretto (Diesel) partners with outlaw cop Brian O'Conner (Walker) on the opposite side of the law in exotic Rio de Janeiro, Brazil. Hunted by the ruthless Agent Hobbs (Dwayne Johnson) and an army of corrupt cops working for a deadly drug kingpin, Toretto and O'Conner reunite the gang from previous Fast adventures to pull off one last job - an insane heist worth $100 million!

FAST AND FURIOUS 6: Since Dom (Diesel) and Brian's (Walker) Rio heist toppled a kingpin's empire and left their crew with $100 million, our heroes have scattered across the globe. But their inability to return home and living forever on the lam have left their lives incomplete. Meanwhile, Hobbs (Johnson) has been tracking an organization of lethally skilled mercenary drivers across 12 countries, whose mastermind (Evans) is aided by a ruthless second-in-command revealed to be the love Dom thought was dead, Letty (Rodriguez). The only way to stop the criminal outfit is to outmatch them at street level, so Hobbs asks Dom to assemble his elite team in London. Payment? Full pardons for all of them so they can return home and make their families whole again

FAST AND FURIOUS 7: After defeating international terrorist Owen Shaw, Dominic Toretto (Vin Diesel), Brian O'Conner (Paul Walker) and the rest of the crew have separated to return to more normal lives. However, Deckard Shaw (Jason Statham), Owen's older brother, is thirsty for revenge. A slick government agent offers to help Dom and company take care of Shaw in exchange for their help in rescuing a kidnapped computer hacker who has developed a powerful surveillance programme.

Be the first to review Fast and Furious (7-Movie Collection) (DVD/UV). 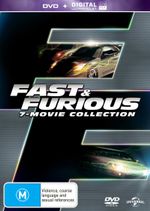 by Rob Cohen, John Singleton, Various Others, Ludacris,  Vin Diesel and others