by Various Others, Herbert Ross, William Wyler, Barbra Streisand,  James Caan and others

Be the first to write a review
Tweet
$34.95
FUNNY GIRL: Follow the early career of stage comedienne Fanny Brice. Only her mother believes Fanny can make it in show business, but when she gets her first break at Keeney's Music Hall, her hilarious debut gets her hired as a comedienne.

FUNNY LADY: In 1930's New York, famous singer Fanny Brice has divorced her first husband Nicky Arnstein. During the depression she has trouble finding work as an artist but meets Billy Rose, a newcomer who writes lyrics and owns his own nightclub.

THE OWL AND THE PUSSYCAT: Meek, owlish Felix (George Segal) and strident, catty Doris (Barbra Streisand) live in the same apartment building. His incessant typing bothers her; her gentlemen callers bother him. Felix informs the landlord of her activities, so Doris moves in on Felix.

When they both get thrown out, they move in with Barney (Robert Klein)...Until they drive him out! That's when Felix and Doris finally decide to put theory into practice. But do opposites attract?

ALL NIGHT LONG: After successful executive, George Duplier (Gene Hackman), is demoted to managing a seedy all-night drugstore, he decides to totally change his life. Leaving his wife, he takes up with Cheryl (Barbra Streisand), a sexy but ditsy neighbour--who's already had an affair with his son (Dennis Quaid)! Now his hands are full with his wild new woman by day and his weird and crazy customers by night.

FOR PETE'S SAKE: Henrietta (Henry) (Barbra Streisand), is the devoted but zany wife of cabby Pete (Michael Sarrazin). Henry will stop at nothing to put Pete through school, so when Pete gets a hot tip on the stock market, Henry raised $3,000, convincing him that the loan came from her rich uncle instead of the local loan shark! But as the stock tumbles, the interest rate escalates--and so does the pace as Henry gets herself into one wacky mess after another trying to earn the money back before Pete finds out.

THE MIRROR HAS TWO FACES: Rose Morgan (Barbra Streisand), who still lives with her mother (Lauren Bacall), is a professor of Romantic Literature who desperately longs for passion in her life. Gregory Larkin (Jeff Bridges) a mathematics professor has been burned by passionate relationships and longs for a sexless union based on friendship and respect. They're two people with almost nothing in common, but Fate in the form of a personal ad and a meddling sister brings them together. And without physical attraction to complicate matters, Rose and Greg become best friends and soon agree to an unconventional marriage built on intellectual passion instead of sexual heat. But when two people meet, marry, try to remain celibate and then fall in love they realise they are courting chaos.

Be the first to review Funny Girl / Funny Lady / The Owl and The Pussycat / All Night Long / For Pete's Sake / The Mirror Has Two Faces (Deluxe Icon Movie Set). 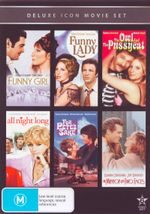 by Various Others, Herbert Ross, William Wyler, Barbra Streisand,  James Caan and others