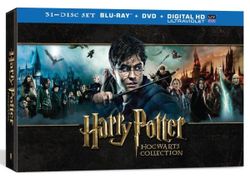 HARRY POTTER AND THE PHILOSOPHER'S STONE: Harry Potter learns on his 11th birthday that he is the orphaned son of two wizards and possesses magical powers of his own. At Hogwarts School of Witchcraft and Wizardry, he learns the high-flying sport Quidditch and plays a thrilling live chess game en route to facing a Dark Wizard bent on destroying him.

HARRY POTTER AND THE CHAMBER OF SECRETS: Cars fly, trees fight back and a mysterious house-elf comes to warn Harry Potter of his second year at Hogwarts. Adventure and danger awaits when bloody writing on a announces: The Chamber Of Secrets Has Been Opened. To save Hogwarts will require all of Harry, Ron and Hermione's magical abilities and courage.

HARRY POTTER AND THE PRISONER OF AZKABAN: n their third year at Hogwarts, Harry, Ron and Hermione meet escaped prisoner Sirius Black and learn to handle a half-horse/half-eagle hippogriff, repel shape-shifting Boggarts and master the art of Divination. Harry must also withstand soul-sucking Dementors, outsmart a dangerous werewolf and deal with the truth about Sirius and his relationship to Harry and his parents.

HARRY POTTER AND THE GOBLET OF FIRE: When Harry Potter's name emerges from the Goblet of Fire, he becomes a competitor in a gruelling battle for glory among three Wizarding schools - the Triwizard Tournament. But since Harry never submitted his name for the Tournament, who did? Now Harry must confront a deadly dragon, fierce water demons and an enchanted maze only to find himself in the cruel grasp of He Who Must Not Be Named.

HARRY POTTER AND THE ORDER OF THE PHOENIX: lord Voldemort has returned, but few want to believe it. In fact, the Ministry of Magic is doing everything it can to keep the Wizarding world from knowing the truth - including appointing Ministry official Dolores Umbridge as the new Defence Against the Dark Arts teacher at Hogwarts. When Professor Umbridge refuses to train her students in practical defensive magic, a select group of students decides to learn on their own. With Harry Potter as their leader, these students (who call themselves "Dumbledore's Army") meet secretly in a hidden room at Hogwarts to hone their Wizarding skills in preparation for battle with the Dark Lord and his Death Eaters.

HARRY POTTER AND THE HALF BLOOD PRINCE: As Lord Voldemort tightens his grip on both the Muggle and Wizarding worlds, Hogwarts is no longer a safe haven. Harry suspect's perils may even lie within the castle, but Dumbledore is more intent upon preparing him for the final battle fast approaching. Together they work to find the key to unlock Voldemort's defences and to this end, Dumbledore recruits his old friend and colleague Horace Slughorn, whom he believes holds crucial information. Even as the decisive showdown looms, romance blossoms for Harry, Ron, Hermione and their classmates. Love is in the air, but danger lies ahead and Hogwarts may never be the same again.

HARRY POTTER AND THE DEATHLY HALLOWS - PART 1: Harry, Ron and Hermione set out on their perilous mission to track down and destroy the secret to Voldemort's immortality and destruction the Horcruxes. On their own and on the run, the three friends must now rely on one another more than ever...but Dark Forces in their midst threaten to tear them apart. Meanwhile, the Wizarding world has become a dangerous place. The long-feared war has begun and the Dark Lord has seized control of the Ministry of Magic and even Hogwarts, terrorising and arresting all who might oppose him. The Chosen One has become the hunted one as the Death Eaters search for Harry with orders to bring him to Voldemort alive.

HARRY POTTER AND THE DEATHLY HALLOWS - PART 2: In the epic finale, the battle between the good and evil forces of the Wizarding world escalates into an all-out war. The stakes have never been higher and no one is safe. But it is Harry Potter who may be called upon to make the ultimate sacrifice draws closer to the climactic showdown with Lord Voldemort.

It all ends here.