Guy Pearce Returns in the Third Instalment of Jack Irish - Dead Point, Based on the Award Winning Thriller By Author Peter Temple.

Jack Irish (Guy Pearce) is a part-time lawyer, mug punter and finder of people who'd rather remain lost. When a high profile judge, Justice Loder (Barry Humphries), commissions him to locate a mysterious red book, Jack is thrown into a world of sexy club owners, dodgy drug dealers, bisexual blackmailers and unhinged killers. Anyone who touches the red book turns up dead. Jack should follow his instinct and back away very slowly and very quietly. If only the judge wasn't family.

Be the first to review Jack Irish: Dead Point. 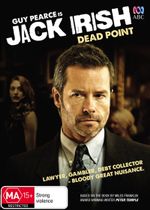