Kingdom Of Heaven:
Gladiator director, Ridley Scott, returns to the epic canvas with Kingdom of Heaven, a film set during the Crusades of the 12th century. It tells the story of Balian of Ibelin (Orlando Bloom), a young blacksmith who finds himself thrust into a decades-long war. A stranger in a strange land, he serves a doomed king, falls in love with an exotic and forbidden queen and rises to knighthood. Ultimately, he must protect the people of Jerusalem from overwhelming forces while striving to keep a fragile peace.

Braveheart:
Mel Gibson stars and directs this sweeping saga about Scotlands brutal battle for independence in the 13th Century. When William Wallaces (Mel Gibson) wife is ravaged and murdered by English troops, his quest for revenge quickly turns into an impassioned fight for his countrys freedom. Tales of Wallaces bravery inspire every commoner to take arms against the English and escalate their crusade into a full-scale war. Braveheart is a rich, emotionally charged historic epic filled with passion, betrayal and courage. Its scope and pageantry make it a true achievement in film making history.

Master And Commander:
Based on author Patrick OBrians series of Aubrey/Maturin novels, the movie is set during the Napoleonic Wars. Crowe is Captain "Lucky" Jack Aubrey, renowned as a fighting captain in the British Navy, and Paul Bettany is ships doctor Stephen Maturin. Their ship, the H.M.S. Surprise, is suddenly attacked by a superior enemy. With the Surprise badly damaged and much of his crew injured, Aubrey is torn between duty and friendship as he pursues a high-stakes chase across two oceans, to intercept and capture his foe. Its a mission that can make his reputation or destroy Lucky Jack and his crew.

Be the first to review Kingdom of Heaven / Master and Commander / Braveheart (Gift Triple). 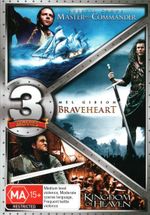