Be the first to review L.A. Confidential (Special Edition). 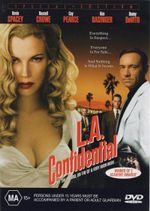