MADAGASCAR: When four pampered animals from New York's Central Park Zoo accidentally find themselves shipwrecked on the exotic island of Madagascar, they discover it really is a jungle out there! Ben Stiller, Chris Rock, David Schwimmer and Jada Pinkett Smith headline an all-star cast of hilarious animals, including a quartet of mischievous penguins and legions of lemurs, led by the outrageous King Julien.

MADAGASCAR ESCAPE 2 AFRICA: In the highly-anticipated sequel to Madagascar, Alex, Marty, Melman, Gloria, King Julien, Maurice and the penguins and the chimps find themselves marooned on the distant shores of Madagascar. In the face of this obstacle, the New Yorkers have hatched a plan so crazy it just might work. With military precision, the penguins have repaired an old crashed plane, sort of. Once aloft, this unlikely crew stays airborne just long enough to make it to the wildest place of all the vast plains of Africa, where the members of our zoo-raised crew encounter species of their own kind for the very first time. Africa seems like a great place...but is it better than their Central Park home?

MADAGASCAR 3 EUROPES MOST WANTED: Alex, Marty, Gloria and Melman are still fighting to get home to their beloved Big Apple. Their journey takes them through Europe where they find the perfect cover: A travelling circus, which they reinvent - Madagascar style.

PENGUINS OF MADAGASCAR: They're cute...they're cuddly...they're back! From the creators of Madagascar comes the hilarious new movie that proves global espionage is for the birds! In DreamWorks' Penguins of Madagascar, your favourite super-spies--Skipper, Kowalski, Rico and Private--join forces with the elite North Wind team to save the world. It's a side-splitting, globe-trotting adventure the whole family will love! 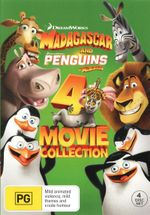