When Captain Amazing, Champion City's legendary superhero, falls into the hands of the evil madman Casanova Frankenstein and his disco-dancing henchmen, there's suddenly a chance for the aspiring superheroes to show what they can do. They're the Mystery Men...a ragtag team of superhero wannabes featuring: Mr Furious, whose power comes from his boundless rage; The Shoveler, a father who shovels "better than anyone"; The Blue Raja, a fork-flinging mama's boy; The Bowler, who fights crime with the help of her father's skull; The Spleen, whose power is pure flatulence; Invisible Boy, who is only invisible when no one's watching and The Sphinx, a cliche-spewing philosopher.

Be the first to review Mystery Men (Cinema Cult). 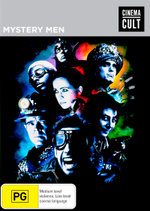