Be the first to write a review
Tweet
$24.95
This major new docu-drama reveals the incredible true story of Nancy Wake - the daring allied spy who became the Gestapo's most wanted woman.

Codenamed 'The White Mouse' for her elusiveness, international femme fatale Nancy Wake was a key inspiration behind Sebastian Faulkes' celebrated fictional spy Charlotte Gray. In this first ever docudrama biopic on Wake, gripping dramatisations are combined with exclusive interviews with her closest friends, confidants and military historians to bring her legend to life.

Born in NZ, raised in Australia, Wake moved to Paris where she worked as a journalist reporting across Europe and married a French aristocrat, Henri Fiocca. When war broke out, she became a vital link in the French resistance and hunted by Nazi spies, was forced to flee to London and leave her husband behind. She then embarked on a life of excitement and danger, returning to France as a British agent in Churchill's secret army, the Special Operations Executive.

Through gripping reconstructions and fascinating interviews, find out how Nancy Wake became the Allies' most decorated service-woman - awarded British, French, Australian and New Zealand honours as well as the American Medal of Freedom.

Be the first to review Nancy Wake: Gestapo's Most Wanted. 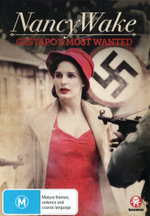