SEASON 1: Led by Special Agent Leroy Jethro Gibbs (Mark Harmon), a tough, highly skilled investigator who's willing to bend the rules to get the job done, this tight-knit crew travel the world investigating everything from murder and espionage to terrorism and kidnapping in this 6-disc set featuring all 23 pulse-pounding episodes from this unique and dynamic show that's ..."taught, smart and wonderfully unpredictable".

SEASON 2: Led by special agent Leroy Gethro Gibbs, a tough, highly skilled investigator who's willing to bend the rules to get the job done, this tight-knit crew prove they're willing to pay the ulitmate price when they travel the globe investigating from murder to espionage to terrorism and kidnapping.

SEASON 3: Led by special Agent Leroy Jethro Gibbs, a tough, highly skilled lead investigator who is not afraid to bend the rules, the NCIS team must somehow band together and recover after suffering the devastating loss of one of their special agents to a terrorist. Further complicating matters for Gibbs is Jennifer Shepard (Lauren Holly), Gibbs former lover who is the new Director of NCIS.

SEASON 4: Led by Leroy Jethro Gibbs, a former Marine whose skills as an investigator are unmatched, this highly trained, tight-knit team travels the world investigating murder, espionage and terrorism.

SEASON 5: More drama, surprises, wit and humour than ever before from the elite team of special agents that bravely battles spies, kidnappers, murderers and terrorists around the world. This season is marked by mysterious secrets among the cutting-edge crew, an explosive showdown with an elusive arms dealer and a shocking final episode that should not be missed. 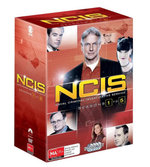