SEASON 06: We find the highly skilled NCIS team still under the able command of Special Agent Jethro Gibbs (Mark Harmon), an uncompromising leader who will see justice done - even if it means bending the rules. This season, Gibbs welcomes new members to the unit, while directing the veteran agents in their dangerous investigations outside the chain of Naval and Marine command.

SEASON 07: this season, the tight-knit group of NCIS agents face their most personal cases to date, as familiar faces, family members and old adversaries complicate their lives and jobs. Also this season, Special Agent Jethro Gibbs is pursued by not one, but two beautiful women, who each have their own secret agenda.

SEASON 09: Special Agent Jethro Gibbs continues to lead the team at the Naval Criminal Investigative Service as they probe into intense military matters, including national security breaches, a secret society of superheroes and brutal murders - one of which drops them in the hearty of Afghanistan and another which leads them to a long-lost agent.

SEASON 10: Serial killers, terrorists-at-large, a downed helicopter and a murder case that hits too close to home are just a few of the explosive cases that the Naval Criminal Investigative Service team are trained to crack. 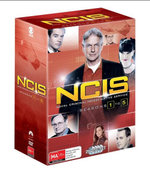