NIGHT AT THE MUSEUM: Good-hearted dreamer, Larry Daley (Ben Stiller), despite being perpetually down on his luck, thinks he's destined for something big. But even he could never have imagined how big when he accepts what appears to be a menial job at a museum of natural history.

During Larry's watch extraordinary things begin to occur: Mayans, Roman gladiators and cowboys emerge from their diorama to wage epic battles. In his quest for fire, a Neanderthal burns down his own display; Attila the Hun pillages his neighbouring exhibits and a T-Rex reminds everyone why he's history's fiercest predator.

Amidst the chaos, the only person Larry can turn to for advice is a wax figure of President Teddy Roosevelt (Robin Williams) who helps our hero harness the bedlam, stop a nefarious plot and save the museum.

NIGHT AT THE MUSEUM: BATTLE OF THE SMITHSONIAN: In addition to Ben Stiller, the cast will be rounded out by many from the original film as well as several new characters from history. The centrepiece of the film will be bringing to life the Smithsonian Institution, which houses the world's largest museum complex with more than 136 million items in its collections, ranging from the plane Amelia Earhart flew on her nonstop solo flight across the Atlantic and Al Capone's rap sheet and mug shot to Dorothy's ruby red slippers and Archie Bunker's lounge chair. No major film has ever shot inside the Smithsonian in Washington...until Night at the Museum: Battle of the Smithsonian.

NIGHT AT THE MUSEUM: SECRET OF THE TOMB: If it's laughter you're after, get ready for the most hilarious night ever! Ben Stiller leads an all-star comedy cast, including Robin Williams, Owen Wilson, Rebel Wilson and Ricky Gervais, for one final, fun-filled Night at the Museum.

This time, Larry Daley and his heroic friends embark on their greatest adventure yet as they travel to London in order to save the magic that brings the museum exhibits to life! 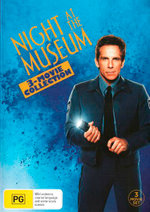