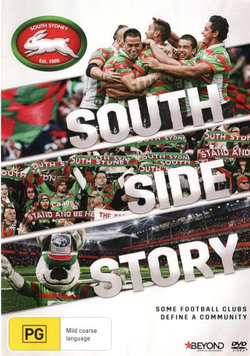 The South Sydney Rabbitohs in 2007: a foundation club of the National Rugby League competition, with 100 years of history and a record 20 first grade Premierships. But for their long-suffering fans, who had not seen their club reach a Grand Final since 1971, years of heartache - from poor performance, internal divisions, financial uncertainty and ultimately exclusion from the competition - had taken their toll. Something had to change.

Hollywood superstar and Rabbitohs tragic Russell Crowe and multi-millionaire Peter Holmes a Court dared to dream they could take a club that epitomises the Australian battling spirit and defines its community - South Sydney - and restore it to its former glory. Having invested millions in the club, the new co-owners of the Bunnies staked both their money and reputations on the venture. But only success on the field would determine whether their dream was borne out of courage, vanity or simple misguided faith.

South Side Story paints an intimate behind-the-scenes portrait of the famous rugby league club in the first season of this new era, as it prepares to re-invent itself for the modern age, and create a culture and professionalism that can return the proud club to its glory days. From the change rooms to the boardroom, from the terraces to the bar, on the training track and the playing field, South Side Story is an in-depth look at two bold men's vision to restore the Rabbitohs as a rugby league powerhouse.

Be the first to review NRL South Side Story (Rabbitohs).