Nominated for 2 Emmys, including Best Casting for a Series, Oz is widely regarded as one of the best prison dramas ever created. The brainchild of creator Tom Fontana (former writer for such hit TV shows as Homicide: Life On The Streets and St. Elsewhere), Oz was one of a number of a highly successful HBO original series to premiere in the 1990s, keeping good company among such shows as Sex And The City and The Sopranos. Premiering in mid-summer 1997, Oz quickly built a large and loyal following of voyeuristic viewers hypnotized by the series' vivid depiction of no-holds-barred prison life. The Oz (Season 2) DVD features a number of dramatic episodes including the season premiere "The Tip" in which Oz takes a rest following a deadly riot that left two officers and six prisoners dead. Governor James Devlin (Zeljko Ivanek) demands an answer to the riot's cause, and he enlists Alvah Case (Charles S. Dutton) to investigate, promising him his support for state Attorney General. After a thorough investigation, he decides to look the other way in regard to Whittlesey and Ross's cigarette operation and Ross's subsequent murder, and he deems the riot a "no-fault" occurrence, incurring the wrath of Governor Devlin Other notable episodes from Season 2 include "Great Men" in which Kareem Said sees the opportunity to have his conviction overturned when the judge from his trial is admonished for accepting bribes, and "Escape from Oz" in which two prisoners are killed when an escape tunnel collapses, while Said turns down a pardon from the Governor, making him all the more popular in Oz.

Be the first to review Oz: Season 2. 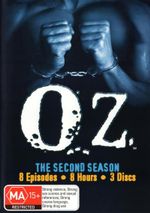