Cult Channel 4 comedy Peep Show takes you inside the mundane lives of South London flat-mates Mark Corrigan and Jeremy Osbourne (aka David Mitchell and Robert Webb)and their daft, uncouth and painfully embarrassing internal monologues. Mark, a socially incompetent office worker, is on a mission to win the heart of his colleague Sophie (Olivia Coleman). Self-absorbed Jeremy, recently cast out by his ex, fancies himself as an undiscovered popstar and lives off Marks goodwill. While Mark pays the bills and faces agonising knock-back after knock-back in his personal life, the inherently lazy Jeremy gets lucky with the ladies and conveniently convinces himself that stardom is just around the corner. When the pair compete for the affection of attractive neighbour Toni (Elizabeth Marmur), a divorcee who is still getting over her ex, the results hare hilarious. Produced by Phil Clarke, directed by Jeremy Wooding and written by Jesse Armstrong and Sam Bain, the multi-award winning Peep Show has been hailed as an innovative and excruciatingly funny British comedy.

Be the first to review Peep Show: Series 1. 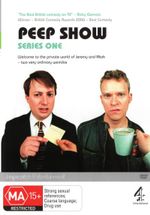 Comedy Comedy
Hold on while we process your request.