Be the first to write a review
Tweet
$36.95
Packed with nonstop action, iconic imagery and thrilling twists and turns, the Planet of the Apes Legacy Collection contains all five original films that caused an evolution revolution in the world of cinematic science fiction. See how it all began--and ended--as legendary stars, including Charlton Heston, Roddy McDowall, Kim, Hunter, Ricardo Montalban, James Franciscus and Claude Akins, dominate the screen in these spectacular adventures that belong in every movie lover's library!

PLANET OF THE APES (1968): Astronaut Taylor crash lands on a distant planet ruled by apes who use a primitive race of humans for experimentation and sport. Soon Taylor finds himself among the hunted, his life in the hands of a benevolent chimpanzee scientist.

BENEATH THE PLANET OF THE APES (1970): Another astronaut crashes through the time barrier searching for the missing Taylor. The daring rescue mission leads to a subterranean city where mutant humans, who practice mind control, worship a weapon capable of destroying the entire planet.

ESCAPE FROM THE PLANET OF THE APES (1971): Two intelligent simians from the future, Cornelius and Zira, travel to present day earth. They become instant sensations, wined and dined and treated like celebrities--until a high-level plot forces them to run for their lives!

CONQUEST OF THE PLANET OF THE APES (1972): The time is near future. Apes have supplanted dogs and cats as household pets and replaced servants as person assistants until their continual mistreatment provokes one ape from the future, Caesar, to lead a spectacular revolt.

BATTLE FOR THE PLANET OF THE APES (1973): Set in 2670 A.D. an idyllic society of man and ape is threatened by both a militant gorilla and a tribe of still-intelligent mutant humans. Finally, simmering tensions dividing the primates erupt in an apocalyptic climax. When the smoke clears, the carnage is everywhere, but there is hope for a new beginning for man and ape. 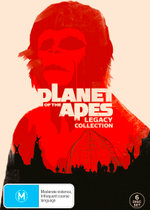