Be the first to write a review
Tweet
$29.95
RISE OF THE PLANET OF THE APES: Our greatest discovery will become the world's greatest threat when a scientist on the verge of a medical breakthrough begins testing on a young chimpanzee named Caesar. But when the chimp develops human-like intelligence and emotions, an epic battle ensues to determine the dominant species on the planet!

DAWN OF THE PLANET OF THE APES: It is 2026, and humanity has been pushed to near extinction by a deadly virus. When a group of survivors desperate to find a new source of power travels into the woods near San Francisco, they discover a highly evolved community of intelligent apes led by Caesar (Andy Serkis). The two species form a fragile peace agreement hut dissention grows and the groups find themselves hurtling toward an all-out war.

WAR FOR THE PLANET OF THE APES: Caesar and his apes are forced into a deadly conflict with an army of humans led by a ruthless Colonel. After the apes suffer unimaginable losses, Caesar wrestles with his darker instincts and begins his own mythic quest to avenge his kind. As the journey finally brings them face to face, Caesar and the Colonel are pitted against each other in an epic battle that will determine the fate of both their species and the future of the planet. 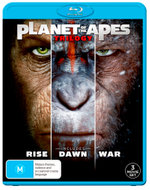