I, ROBOT: In 2035 A.D., robots live in perfect harmony with humans and have become an everyday part of life on Earth. When a scientist (James Cromwell) at the U.S. Robotics Corporation is found dead, Chicago detective Del Spooner (Will Smith) is called to investigate. He uncovers the possibility that a robot may be the primary suspect in this case.

THE DAY THE EARTH STOOD STILL: Keanu Reeves portrays Klaatu, an otherworldly being, whose arrival on Earth triggers an unstoppable series of events that threaten all of mankind. When a woman and her young stepson find themselves embroiled in the alien's plan, they become the world's only hope to stave off apocalyptic annihilation.

BABYLON A.D.: In the darkly futuristic world of Babylon A.D. the rules are simple: kill or be killed. Hard-hitting action superstar Vin Diesel stars as Toorop, a ruthless mercenary hired to smuggle a mysterious young woman from post-apocalyptic confines of Eastern Europe to the glittering megalopolis of New York City. Eye-popping action and mind-blowing science fiction clash head-on in this hard-edge thriller, where the only rule is survival.

IN TIME: In a world where time has replaced money as the only currency, you can either live forever or die trying. Justin Timberlake and Amanda Seyfried star in this action-packed race against the clock, where one man finds himself falsely accused of murder and tries to bring down a corrupt system, fighting to stay alive when every second counts.

SUNSHINE: In the year 2057, the sun is dying...and mankind faces extinction. Earth's last hope rests with a courageous crew on a mission to ignite the fading star with a massive nuclear weapon. But deep into their voyage, their mission begins to unravel, and they find themselves fighting not only for their lives, but for the future of all of us.

Be the first to review Sci-Fi 5-Pack (I. 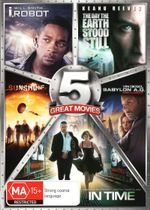