Tad the Lost Explorer / Khumba / Justin and the Knights of Valour

TAD: THE LOST EXPLORER: Adventure! Tadeo Jones has always wanted to become an adventurous and famous archaeologist but instead he spends his days daydreaming between the cranes and cement of the building site where he works. The chance to fulfil his dreams comes along when his friend, a celebrated archaeologist, receives a mysterious stone tablet: the key to the Lost City of Paititi and its legendary treasure. When the archaeologist suffers an unfortunate accident, Tad must take his place on the expedition!

KHUMBA: Animals! Life is not all black and white for Khumba, a young zebra born with only half his stripes. When his superstitious herd blame him for the sudden drought affecting the land, Khumba must team up with a sassy wildebeest and a flamboyant ostrich to find the legendary waterhole where the first zebras got their stripes, while coming face to face with a tyrannical leopard in an epic battle to earn his stripes.

JUSTIN AND THE KNIGHTS OF VALOUR: Action! Justin lives in a king do where bureaucrats rule and knights have been ousted. His dream is to become one of the Knights of Valour, like his grandfather was, Leaving home and embarking on a quest to become a knight, Justin seems like an unlikely candidate for knighthood, but must rise to the challenge quickly when a banished former knight and his army return and threaten to destroy the kingdom.

Be the first to review Tad the Lost Explorer / Khumba / Justin and the Knights of Valour. 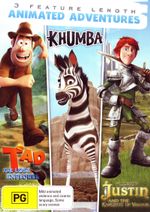 Tad the Lost Explorer / Khumba / Justin and the Knights of Valour