Set on Hawaii\'s stunning North Shore, a charismatic drifter forms a dubious alliance with a powerful local businessman while hooking up with a criminally-minded seductress to double-cross a wealthy developer and his cohorts.

Based on the Elmore Leonard novel that inspired both the 1969 film and this remake, THE BIG BOUNCE is a comic film noir about an everyman who finds trouble in the form of a beautiful blonde. Jack Ryan (Owen Wilson) is a small-time scam artist who is determined to leave that life behind after yet another run-in with the law. But when he meets the mistress of his former boss, Ray Ritchie (Gary Sinese), all bets are off. Nancy (newcomer Sara Foster) is hot, mischievous, and up to no good, but Jack is too smitten to use his better judgment. It isn\'t long before he\'s agreed to help her steal $200,000 from Ray. Along the way, he must contend with a series of potentially shady characters, who might not be what they seem (Morgan Freeman, Charlie Sheen, and Bebe Neuwirth).\r\n\r\nDirected with an easygoing approach that fits perfectly with the laid back Hawaiian locales, THE BIG BOUNCE gets an enormous boost from Owen Wilson, who appears to be having the time of his life. This might have something to do with his costar Foster, a former model whose mere presence is enough to make the screen sizzle. The movie also features hilarious supporting turns from Freeman, Neuwirth, and especially Sheen.\r\n 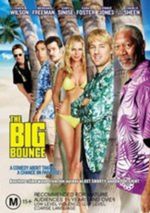