by Steve Barron, Roger Goldby, Various Others, Keeley Hawes,  Josh O'Connor and others

A warm, funny feel-good series about a family's adventures on a gorgeous Greek island when they uproot from their English home in the hope of a better life.

Based on Gerald Durrell's much-loved Corfu trilogy of novels, The Durrells sees impoverished but sparky widow Louisa Durrell make the radical decision to seek out a new destiny for her family when she relocates her reluctant brood to a dilapidated house in the Greek sun. Follow the family as they adjust to their new life, face a whole new set of challenges and meet new friends, rivals, lovers - and animals.

SERIES 1: The Darrell's sees impoverished but sparky widow Louisa Durrell make the radical decision to seek out a new destiny for her family when her options in late 1930's England seem to be limited to struggling on or marrying a wealthy but dreary older man. Concerned that the lives of her four 'children', ranging in age from 11 to 21, are heading down the wrong track, she relocates her reluctant brood to a dilapidated house in the Greek sun.

SERIES 2: Spirited English widow Louisa and her brood put down roots in their dilapidated rented house, alongside an ever-increasing menagerie of animals brought home by youngest son Gerry. Doing their best to settle into the community, they need to earn money to pay their aggressive new landlady Vasilia, who sees Louisa as a love rival for charming playboy Hugh. With the help of Spiro and Theo, the Durrell's resort to selling typical British produce at the market. But accidentally poisoning the locals might not be the best way to start a new business.

SERIES 3: The beautiful island of Corfu continues to work its magic on the eccentric Durrell family. Even a visit from Aunt Hermione isn't the usual dreaded experience as the formerly formidable matriarch has embraced the laid-back Greek attitude and found romance. Leslie's also enjoying a much-improved love life with three very different girls. But there's no safety in numbers when his mother and siblings decide to interfere. Margo has (temporarily) given up on love and found a new vocation, while Gerry's obsession with animals continues to grow. As for Louisa, a trip to the UK with Larry to sort out family affairs reminds her of the restrictions of her old life. After a brush with bohemian London artists, she realises her heart lies in her island paradise.

SERIES 4: The future's looking bright for the eccentric Durrell's, as we catch up with their lives on the beautiful island of Corfu. They're each channelling their heartbreak in different ways. Louisa's keeping busy by opening the doors of the family villa as a guest house. But with cousin Basil her only paying guest, business isn't exactly booming. Larry's struggling to get his risque Black Book published and enjoying love with two ballet dancers, while Leslie's throwing himself back into his job (and shooting). Animal-mad Gerry now has ambitions to open his own zoo and Margo's up for another new challenge as she decides to start her own beauty salon.

Be the first to review The Durrells. 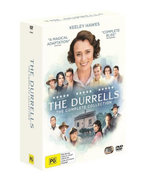 by Steve Barron, Roger Goldby, Various Others, Keeley Hawes,  Josh O'Connor and others