The Fast and The Furious:
They've got the adrenaline rush and the mean machines, but most of all, they've got the extreme need for speed. On the turbo charged streets of Los Angeles, every night is a championship race. With nitro boosted fury, Dominic Toretto, rules the road turning all his challengers into dust. He and his rival, Johnny Tran are the boldest, the baddest and the best. But now, there's new rage on the road. They know he's tough, they know he's fast, but what they don't know is that he's a speed demon detective with enough drive and determination to come out the winner.

2 Fast 2 Furious:
Brian O'Conner (Paul Walker) has lost his job after letting his friend Dom Toretto, a street racing crime boss, escape the law. Now he's back in Miami with his old friend, Roman Pearce (Tyrese). He's working undercover for the cops to avoid punishment for his actions. He helping the gorgeous Monica Fuentes (Eva Mendes) track down a shady Miami busniness man. And he's racing again this time, it's for his life...

The Fast and The Furious - Tokyo Drift
Set in the sexy and colourful underground world of Japanese drift racing, the newest and fastest customised rides go head-to-head on some of the most perilous courses in the world. Sean Boswell (Lucas Black) is an outsider who attempts to define himself as a hotheaded underdog street racer.

Fast & Furious:
Vin Diesel and Paul Walker reteam for the ultimate chapter of the franchise built on speed Fast & Furious. Heading back to the streets where it all began, they rejoin Michelle Rodriguez and Jordana Brewster to blast muscle, tuner and exotic cars across Los Angeles and floor through the Mexican desert in the new high-octane action-thriller.

Special Features
includes deleted scenes, audio commentaries with the crews, making of, videos and much more. 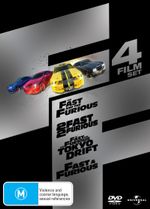