FAST AND THE FURIOUS: Set in the fierce and frenzied world of Los Angeles illegal street racing, where winning is the way to power, The Fast and the Furious is pure fast-paced, adrenaline-fuelled car action. Paul Walker stars as a rookie cop who goes deep undercover, posing as a racing member in Vin diesels team, in order to investigate a series of hijackings. Buckle up and take a ride with this sizzling young cast featuring award-winning Michelle Rodriguez and sexy Jordana Brewster. The Fast and the Furious is the high energy roller-coaster drive of the year!
PITCH BLACK: Vin Diesel stars as the enigmatic fugitive in the film that first introduced the world to the character of Richard B Riddick. Pitch Black is a pulse-pounding sci-fi action adventure, set in a world where the daylight can but you, but the darkness will kill you.
CHRONICLES OF RIDDICK: Vin Diesel reprises his role as hunted fugitive Riddick, his anti-hero character from cult movie Pitch Black. Riddick is on the run. Escaping from mercenaries determined to collect the price on his head, he finds himself at the heart of a battle that is not his. With Necromonger conquerors threatening the future of the entire universe, Riddick could be the only unlikely hero to save the human race. But will he be interested in saving anything other than his own life?

Be the first to review The Fast and the Furious / Pitch Black / The Chronicles of Riddick (Vin Diesel Icon Collection). 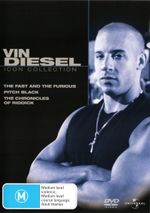