From director M. Night Shyamalan (The Sixth Sense, Signs) comes a lightning-paced, heart-pounding paranoid thriller about a family on the run from an inexplicable and unstoppable event that threatens not only humankind . . . but the most basic human instinct of them all: survival.
It begins with no clear warning. It seems to come out of nowhere. In a matter of minutes, episodes of strange, chilling deaths that defy reason and boggle the mind in their shocking destructiveness, erupt in major American cities. What is causing this sudden, total breakdown of human behavior? Is it some kind of new terrorist attack, an experiment gone wrong, a diabolical toxic weapon, an out-of-control virus? Is it being transmitted by air, by water . . . how?
For Philadelphia high school science teacher Elliot Moore (Academy Award nominee Mark Wahlberg) what matters most is finding a way to escape the mysterious and deadly phenomenon. Though he and his wife Alma (Zooey Deschanel) are in the midst of a marital crisis, they hit the road, first by train, then by car, with Elliot's math teacher friend Julian (Emmy Award winner John Leguizamo) and his 8 year-old daughter Jess (Ashlyn Sanchez), heading for the Pennsylvania farmlands where they hope they'll be out of reach of the grisly, ever-growing attacks. Yet it soon becomes clear that no one - and nowhere - is safe. This terrifying, invisible killer cannot be outrun. It is only when Elliot begins to discover the true nature of what is lurking out there - and just what has unleashed this force that threatens the future of humanity -- that he discovers a sliver of hope that his fragile family might be able to escape what is happening.

Be the first to review The Happening. 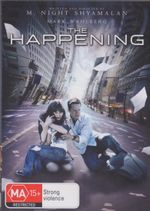