Be the first to write a review
Tweet
$19.95
During his 11 years as Prime Minister, John Howard led his government through a decade of monumental upheaval. Throughout it all, he proved himself to be the ultimate political master. Now, The Howard Years goes behind the scenes to present the inside story of the Howard Government and examine the legacy of his time in office.

Almost one year to the day after he lost government and his seat, John Howard speaks openly about the key moments that defined his Prime Ministership--among them the war on terror, East Timor, waterfront reform, the GST and his relationship with Peter Costello. In the tradition of Labor in Power (the story of the Labor Government from 1983--1993) this four-part series is told through the words of the key players including John Howard, Peter Costello, George W. Bush, Tony Blair, Peter Reith, Alexander Downer, as well as key advisors and public servants.

More than 50 interviews were conducted for the series, with John Howard giving 20 hours of his time for interviews with Fran Kelly as well as background briefings. All up, over 180 hours of interviews were recorded in Australia and overseas. The definitive television record of the Howard Government, the series documents the life and times of Australia's second longest serving Prime Minister and the key events, achievements and controversies of his government.

Be the first to review The Howard Years. 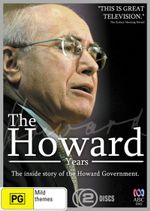