RESIDENT EVIL: Based on the hugely popular video game series, Resident Evil is an action packed techno thriller that will have you sitting on the edge of your seat until the very end. Sexy up and coming actresses Milla Jovovich and Michelle Rodriguez star as two commandos in a military task force. Their mission is to isolate a deadly virus that has wiped out the entire staff of an ultra secret underground research centre run by the Umbrella Corporation and controlled by the Red Queen, an all powerful supercomputer. And they only have three hours! It is a battle of good versus evil, human against computer and the living against the Undead.

RESIDENT EVIL: APOCALYPSE: The battle between the living and the undead continues in the explosive action thrill ride from writer / producer Paul W.S. Anderson (Resident Evil, AVP) that is superior to the original film (Tim Cogshell, Boxoffice Magazine).

Action star Milla Jovovich returns to the role of ass kicking heroine Alice, who is once again pitted against hordes of the undead, the powerful Umbrella Corporation and their latest creation - the super human super weapon: Nemesis.

RESIDENT EVIL: EXTINCTION: Milla Jovovich returns as ass-kicking heroine Alice in the explosive, action-packed third instalment in the film series based on the wildly popular video game. Resident Evil: Extinction is chock full of all the full-on, undead mayhem that fans of the series have come to expect.

RESIDENT EVIL: AFTERLIFE: Alice (Milla Jovovich) is back in the fourth instalment of the Resident Evil saga. Now without super human powers shell team up with fellow survivors Claire and Chris (Ali Larter and Wentworth Miller) to take on the armies of the Undead and take down the Umbrella Corporation whose virus has created them.

RESIDENT EVIL: RETRIBUTION: Umbrella Corporations deadly T-virus is spreading across the globe, transforming ordinary people into legions of zombies. Headed for extinction, the human race has just one hope: Alice (Milla Jovovich). She is on a mission, fighting her way through cities and across continents, all inside the Umbreallas prime research facility. Old friends become new enemies as she battles to escape and discovers that everything that she believes may not even be true. 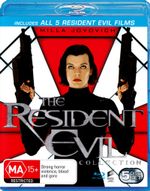