Be the first to write a review
Tweet
$39.95
The Unknown War is a landmark television documentary series about the Soviet struggle against - and ultimate victory over - the Nazi war machine.

Hosted and narrated by Academy Award winner Burt Lancaster, this sprawling series features rare and stunning footage recorded by Soviet camera crews on the front lines, most of it unseen since its original broadcast 30 years ago. From 22 June 1941, invasion of the Soviet Union to the Russians victorious march into Berlin in 1945, the devastating battles in the air, at sea and on land are detailed with astonishing images. These stories of heroism, savagery and suffering from what the Russians call The Great Patriotic War will shed new light on the Red Armys massive contribution to the Allies defeat of Hitler in World War II.

A Soviet-American collaboration produced in 1978 during the throes of the Cold War the 20 part saga was pulled from the air in the wake of the Soviet invasion of Afghanistan. Its re-emergence should be heralded as an essential addition to the recorded history of World War II.

Be the first to review The Unknown War. 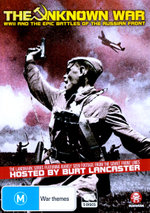