Be the first to write a review
Tweet
$19.95
Prepare to join the fight for mutant rights with this X-Men Trilogy Box Set! Experience the first three films in this 3-disc collection, featuring behind the scenes content and explosive action. The war for the future of mankind has come to a head. Are you ready to choose a side?

X-MEN: Born into a world filled with prejudice are children who possess extraordinary and dangerous powers - the result of unique genetic mutations. Cyclops unleashes bolts of energy from his eyes. Storm can manipulate the weather at will. Rogue absorbs the life force of anyone she touches. But under the tutelage of Professor Xavier (Patrick Stewart), these and other outcasts learn to harness their powers for the good of mankind. Now they must protect those who fear them as the nefarious Magneto (Ian McKellen), who believes humans and mutants can never co-exist, unveils his sinister plan for the future!

X-MEN 2: The time has come for those who are different to stand united. Mutants continue their struggle against a society that fears and distrusts them. Their cause becomes even more desperate following an incredible attack by an undetermined assailant possessing extraordinary abilities. The shocking attack renews the political and public outcry for both a Mutant Registration Act, and an anti-mutant movement, now led by William Stryker. A vocal, wealthy, former commander for the Army, Stryker, is rumoured to have experimented on mutants. Strykers dubious mutant work is somehow tied to Logans/Wolverines mysterious and forgotten past. As Logan/Wolverine searches for clues to his origin, Stryker puts into motion his anti-mutant program--launching a severe attack on Professor Xavier's mansion. Magneto, newly escaped from his plastic prison, proposes a partnership with Professor Xavier and the X-Men to combat their common and formidable enemy: Stryker. With the fates of Xavier, mankind, and mutant kind, in their hands, the X-Men face their most dangerous mission yet.

X-MEN 3: Sworn to protect the world that both loves and hates them, the X-Men are a group of heroes both blessed and cursed at birth with mutant abilities that set them apart from mankind. Gathered together by the mutant telepath Professor Charles Xavier in hopes of bridging the gap between mutants and mankind, the X-Men have been trained to use their diverse powers for good. The next chapter in the X-Men franchise finds the mutants still living in a society that mistrusts them. Struggling to find their place among humans, the mutants continue to face challenges. 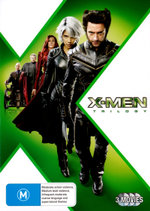