Be the first to write a review
Tweet
$14.95
The rampage of a madman who has never been caught; the elusive cipher slayer who ripped an entire nation in fear. He publicly claimed 13 victims, Police pinned him with seven, five dead. The true body count may never be known.
One thing is certain: That count includes the living.

Based on the true story of a serial killer who terrified the San Francisco Bay Area and taunted authorities in four jurisdictions with his ciphers and letters for decades, "Zodiac" is a thriller from David Fincher, director of "Se7en" and "Fight Club".

Hunting down the hunter would become an obsession for four men, an obsession that would turn them into ghosts of their former selves, their lives built and destroyed by the killer's endless trail of clues. Of the four, Robert Graysmith (Jake Gyllenhaal) was the wild card. A shy editorial cartoonist, Graysmith didn't have the cache and expertise of his seasoned and cynical colleague Paul Avery (Robert Downey Jr), the San Francisco Chronicle's star crime reporter. He didn't have Avery's connections with San Francisco Police Department's celebrated and ambitious Homicide Inspector David Toschi (Mark Ruffalo) and his low-key, meticulous partner Inspector William Armstrong (Anthony Edwards). What he did have was a crucial insight no one anticipated. Based on the book by the man who lived it (Robert Graysmith) Zodiac is a critically acclaimed thriller that will keep you guessing long after the credits have rolled.

Be the first to review Zodiac (Director's Cut). 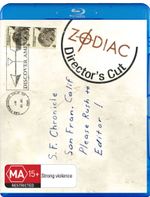