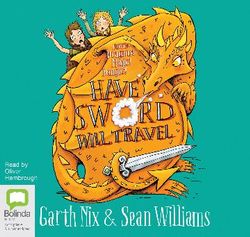 Have Sword, Will Travel

by Garth Nix and Sean Williams

When Odo and Eleanor stumble upon an ancient sword in a river outside their village, something very unexpected happens ... the sword starts to talk! Much to Odo's dismay he discovers that he's awoken a famous enchanted blade called Biter, and thus has instantly become a knight. Eleanor would love to become a knight – but she's not the one with the sword.

Unearthing Biter is only the start of their troubles; soon boy, girl and sword must depart on a noble quest to save their kingdom from threats – in both human and dragon form.

'... a fast-paced, tongue-in-cheek adventure featuring memorable heroes, an entertaining premise, and not one but two magical swords with way too much personality...[an] enjoyable spin on the age-old hero's journey, filled with action and humour.' Publishers Weekly

'En garde for an implied sequel that is already too bloody far away.' Kirkus Reviews

Be the first to review Have Sword.

Have Sword, Will Travel

by Garth Nix and Sean Williams