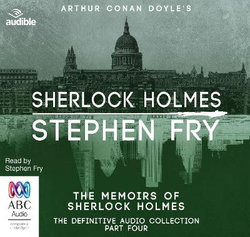 The Memoirs of Sherlock Holmes 1

The fourth instalment in Sherlock Holmes: The Definitive Collection, narrated by Stephen Fry.

Ever since he made his first appearance in A Study In Scarlet, Sherlock Holmes has enthralled and delighted millions of fans throughout the world.

Now Arthur Conan Doyle's complete works – four novels and five collections of short stories – has been brought to life by Stephen Fry, a lifelong fan of Doyle's detective fiction, in this The Definitive Collection. In addition, Stephen has written and narrated nine insightful, intimate and deeply personal introductions to each title.

Part 4: The Memoirs of Sherlock Holmes

Sherlock Holmes is back on the case in these sparkling short stories, in which we learn about Holmes' early days as a sleuth, encounter a seemingly murderous widow and meet the great detective's brother, Mycroft, for the first time. And, in 'The Final Problem', Holmes comes face-to-face with his nemesis, Professor Moriarty, in a battle of wits that could kill them both.

'... it was reading the Sherlock Holmes stories as a boy that first turned me on to the power of writing and storytelling.' Stephen Fry Stephen Fry is an award-winning comedian, actor, presenter and director.

He rose to fame alongside Hugh Laurie in A Bit of Fry and Laurie (which he co-wrote with Laurie) and Jeeves and Wooster, and was unforgettable as Captain Melchett in Blackadder.

More recently he presented Stephen Fry: The Secret Life of the Manic Depressive, his groundbreaking documentary on bipolar disorder, to huge critical acclaim. His legions of fans tune in to watch him host the popular quiz show QI each week.

The Memoirs of Sherlock Holmes