From the multi-million copy bestselling cookbook brand, 4 Ingredients Keto brings you over 70 delicious recipes, each with a clear nutritional information table and beautiful full colour photography.

4 Ingredients Keto started as a Facebook Live promise. Kim announced to her over 725,000 followers that she was adopting a 2-week Keto diet to shed a couple of kilos and would share the recipes she loved along the way. The response was overwhelming with fans clamouring for more and 4 Ingredients Keto the book was born.

The ketogenic diet is a strict regimen of low-carb, high-fat foods that forces the body into a state of ketosis -when you burn fat, instead of carbohydrates, for energy. A Google Trends chart over the past year shows searches for "keto" have dwarfed searches for any other dietary term. With the help of social media and word of mouth, demand for keto-friendly products has gone through the roof. Kim now addresses that demand directly with simple and delicious recipes made with fresh wholefoods that nourish, making this the perfect book for ANYONE wanting to eat healthier and lose weight.

With more than 250,000 Australian social media interactions every single month and over 80,000 subscribers to their weekly newsletter, 4 Ingredients is one of Australia's most trusted cookbook brands.

4 Ingredients author and entrepreneur Kim McCosker loves to inspire readers and audiences with her simple, hard working, and determined recipe for success. As a busy wife and mum to three boys, Kim McCosker holds a Degree in International Finance, trained as a Financial Planner, and is a self-taught cook.

Putting into practice her mantra of “Family First,” Kim’s concept created the most successful book title in Australia 4 Ingredients with cookbook sales now spanning three continents, twenty-six countries, and six foreign languages! As the highest self-published author in Australian history, Kim’s continued aim with 4 Ingredients is to simplify all forms of cooking by creating quick, easy, and delicious recipes. Over twenty 4 Ingredients cookbooks have resulted in many cultural necessities and dietary considerations, often endorsed by recognised associations.

The 4 Ingredients phenomenon has taken digital media to heightened levels with one of the fastest-growing Australian-based Facebook pages currently with 540,000 fans and over 60,000 iApp downloads. 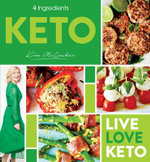