Calcutta, 1919. Captain Sam Wyndham, a former Scotland Yard detective new to India, is confronted with a highly charged case: a senior British official has been found murdered, in his mouth a note warning the British to quit India, or else...
The winner of the Harvill Secker/Daily Telegraph crime writing competition
Captain Sam Wyndham, former Scotland Yard detective, is a new arrival to Calcutta. Desperately seeking a fresh start after his experiences during the Great War, Wyndham has been recruited to head up a new post in the police force. But with barely a moment to acclimatise to his new life or to deal with the ghosts which still haunt him, Wyndham is caught up in a murder investigation that will take him into the dark underbelly of the British Raj.
A senior official has been murdered, and a note left in his mouth warns the British to quit India: or else. With rising political dissent and the stability of the Raj under threat, Wyndham and his two new colleagues - arrogant Inspector Digby and British-educated, but Indian-born Sargeant Banerjee, one of the few Indians to be recruited into the new CID - embark on an investigation that will take them from the luxurious parlours of wealthy British traders to the seedy opium dens of the city.
The start of an atmospheric and enticing new historical crime series.

**Shortlisted for the 2017 Goldsboro Crown for Historical Debut Fiction**

Abir Mukherjee grew up in the west of Scotland. At the age of fifteen, his best friend made him read Gorky Park and he’s been a fan of crime fiction ever since.

The child of immigrants from India, A Rising Man, his debut novel, was inspired by a desire to learn more about a crucial period in Anglo-Indian history that seems to have been almost forgotten.

It won the Harvill Secker/Daily Telegraph crime writing competition and became the first in a series starring Captain Sam Wyndham and ‘Surrender-not’ Banerjee. Abir lives in London with his wife and two sons.

Be the first to review A Rising Man. 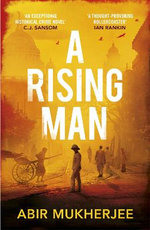 Crime & Mystery Historical fiction Historical mysteries
Hold on while we process your request.