Shortlisted for the 2019 Miles Franklin Award

*Shortlisted for the 2019 Miles Franklin Award*

Long before I ever met him I knew his name from the leaky dessicated type of a grey-brown slim volume, cheaply printed but essential to my research...

Seeking stories of Australia's Great Ocean Road, a young writer stumbles across a small, technical manual from a minor player in the road's history: Dune Stabilisation and Other Engineering Difficulties by FB Herschell.

It is a volume unremarkable in every way, save for the surprising portrait of its author that can be read between its lines: a vision of a man who writes with uncanny poetry about sand.

And as he continues to mine the archive of FB Herschell - engineer, historian, philosopher - it is not the subject, but the man who begins to fascinate. A man whose private revolution among the streets of Paris and dunes of France begins to change the way he sees Australia's most famous coastal road...

Gregory Day is a writer, poet and musician whose debut novel, The Patron Saint of Eels (Picador, 2005), won the prestigious Australian Literature Society Gold Medal in 2006, was shortlisted for the Commonwealth Writers Prize for a first novel, and included on the VCE Literature syllabus for five years.

His second novel, Ron McCoy's Sea of Diamonds (Picador, 2007), was shortlisted for the 2008 NSW Premier's Prize for fiction, and his novel, The Grand Hotel (Random House, 2010), was chosen by the Herald Sun as the Best Australian Novel of 2010.

In 2011 Gregory's story 'The Neighbour's Beans' won the Elizabeth Jolley Short Story Prize. He is a regular contributor to the literary pages of The Age and The Australian newspapers, writes a regular feature called 'Mislaid Books of the Sea' for Great Ocean Quarterly magazine and also writes long form literary criticism for the Sydney Review of Books. He lives on the southwest coast of Victoria, Australia.

His latest book, Archipelago of Souls, was published by Picador in 2015.

Be the first to review A Sand Archive. 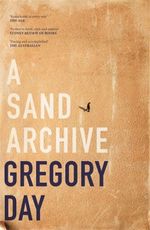