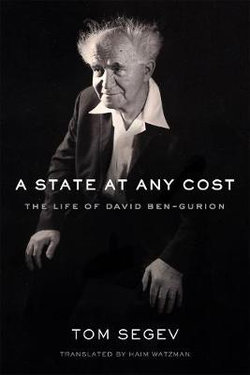 A State at Any Cost

The Life of David Ben-Gurion

When Tom Segev’s biography of David Ben-Gurion was published in Israel in early 2018, it was a major event, making headlines and earning worldwide coverage in The New York Times and elsewhere. The culmination of a lifetime's work, A State at Any Cost casts the history of Israel and its founder in a bracing new light. Using large amounts of previously unrevealed archival material, Segev demonstrates Ben-Gurion's power, skills, and achievements, as well as his limitations, weaknesses, and failures.

Segev's probing account reveals for the first time Ben-Gurion’s secret negotiations with the British on the eve of Israel’s independence, his willingness to countenance the forced transfer of Arab neighbors, his relative indifference to the status of Jerusalem and Israel’s nuclear program, and his occasional "nutty moments" - from UFO sightings to a plan for Israel to acquire territory in South America.

Segev also shows that Ben-Gurion first heard about the Holocaust from a Palestinian Arab acquaintance, and reveals Ben-Gurion's tempestuous private life, including the testimony of four longtime lovers. Many admired Ben-Gurion in his day, and many now miss his vision and inspiration, his boldness and integrity. Others have vilified him as an aggressive, divisive, dour, and often capricious politician.

But only a few have really grasped the most intimate and guarded aspects of his complex character, the man behind the myth. As in his seven previous books on Israel and the Holocaust, which have been translated into fourteen languages, Segev again offers a vibrant page-turner with unexpected discoveries and original insights.

Tom Segev is among Israel's leading journalists and historians. His works include The Seventh Million; 1967: Israel, the War, and the Year That Transformed the Middle East; Simon Wiesenthal; and One Palestine, Complete (chosen one of ten best books of 2000 by The New York Times).

Be the first to review A State at Any Cost.

A State at Any Cost