After the End: Recent Apocalypses

by Margo Lanagan, Nnedi Okorafor,  Carrie Vaughn and others

From the Sumerian epic of Gilgamesh to Norse prophecies of Ragnarok to the
Revelations of Saint John to Cormac McCarthy's The Road, and any
number of fictional zombie Armageddons and the dystopic world of The Hunger
Games, we

Her novel Tender Morsels won the World Fantasy Award for Best Novel and was an Honor Book in the Michael L. Printz Award for Excellence in Young Adult Literature.

Her novel Sea Hearts was shortlisted for the Stella Prize and won a WA Premiers Book Award, the CBCA Book of the Year: Older Readers, The Norma K Hemming Award and the Barbara Jefferis Award, an Indie Award and an Aurealis Award among many other honours.

Nnedi Okorafor was born in the United States to Nigerian parents of Igbo descent. Her novels include Who Fears Death (winner of the World Fantasy Award for Best Novel), Akata Witch (an Amazon.com Best Book of the Year), Zahrah the Windseeker (winner of the Wole Soyinka Prize for African Literature), and The Shadow Speaker (winner of the CBS Parallax Award).

Paolo Bacigalupi is the author of the highly acclaimed The Drowned Cities and the New York Times bestselling Ship Breaker, which was also a Michael L. Printz Award winner and a National Book Award finalist.

He is also the author of The Windup Girl and Pump Six and Other Stories, and is a Hugo, Nebula, Locus, Compton Crook, John W. Campbell Memorial, and Theodore Sturgeon Memorial Award winner. He lives in western Colorado with his wife and son.

Be the first to review After the End: Recent Apocalypses. 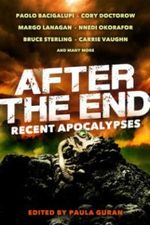 After the End: Recent Apocalypses

by Margo Lanagan, Nnedi Okorafor,  Carrie Vaughn and others

Anthologies (non-poetry) Short stories Science fiction
Hold on while we process your request.