Agatha Raisin and the Haunted House

A vengeful ghost comes back to haunt the living?

Reports of a haunted house soon have Agatha snooping around, but it turns out the victim of the haunting is a universally disliked old biddy on whom someone is playing a practical joke. And then the old lady is murdered - but for Agatha, solving a crime is much more fun than hunting a ghost! Very soon she's up to her usual tricks, involving the villagers, local police, and, of course, her handsome new neighbour . . .


Praise for the Agatha Raisin series:

M.C. Beaton was born in Glasgow, Scotland. She started her first job as a bookseller in charge of the fiction department at John Smith & Sons Ltd. While bookselling, by chance, she received an offer from the Scottish Daily Mail to review variety shows and quickly rose to become their theatre critic.

She left Smith’s to join Scottish Field magazine as a secretary in the advertising department, without any shorthand or typing experience, but quickly got the job of fashion editor instead. She then moved to the Scottish Daily Express where she reported mostly on crime. This was followed by a move to Fleet Street to the Daily Express where she became chief woman reporter.

After marrying Harry Scott Gibbons and having a son, Charles, Marion moved to the United States where Harry had been offered the position of editor of the Oyster Bay Guardian. They subsequently moved to Virginia and Marion worked as a waitress in a greasy spoon in Alexandria while Harry washed the dishes. Both then got jobs at Rupert Murdoch’s new tabloid, The Star, and moved to New York.

Anxious to spend more time at home with her small son, Marion, supported by her husband, started to write Regency romances. After she had written close to 100, and had gotten fed up with the 1811 to 1820 period, she began to write detective stories under the pseudonym of M. C. Beaton. On a trip from the States to Sutherland on holiday, a course at a fishing school inspired the first Hamish Macbeth story.

Marion and Harry returned to Britain and bought a croft house in Sutherland where Harry reared a flock of black sheep. When her son graduated, and both of his parents tired of the long commute to the north of Scotland, they moved to the Cotswolds, where Agatha Raisin was created.

Be the first to review Agatha Raisin and the Haunted House. 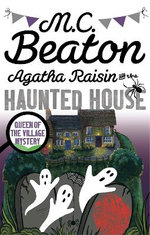 Agatha Raisin and the Haunted House

Crime & Mystery Quirky & Cosy Crime
Hold on while we process your request.