It was also once an area partly depleted by logging and long-term agricultural use. Some forty years ago, renowned architect Philip Cox and a group of like-minded friends purchased 80 hectares as a private retreat and a conservation exercise.

Applying his own aesthetic principles of vista, light, texture, colour and mass, Philip worked with nature to reveal and enhance the bushland in an enticing way. He replanted trees in denuded areas, cleared scrubby undergrowth in others and added lakes and ponds. Carefully, he curated extensive walks through bush and gullies, along the coast and river, offering wondrous experiences.

These walks are punctuated with drama and romance as you enter various garden rooms and encounter sculptures, waterlily-adorned lakes, ponds and art-filled pavilions. As the world becomes more global, maintaining indigenous Australian landscapes and gardens becomes important. This book captures a unique vision of a wild landscape and gives new meaning to the concept of creating an Australian garden.

Eminent Australian architect Philip Cox graduated from Sydney University with honours in architecture in 1962, founding his own company, Philip Cox and Associates, in 1967.

His practice, informed by the principles of structure, craft, art and nature, has delivered a multitude of iconic projects both in Australia and abroad, including the Marina Bay redevelopment in Singapore, AAMI Park in Melbourne, the National Maritime Museum of China and the Yulara Tourist Resort in Australia's red centre.

Philip has received numerous awards in recognition of his contribution to architecture, including the Royal Australian Institute of Architects (RAIA) Gold Medal in 1984, Life Fellowship to the RAIA in 1987 and an Honorary Fellowship of the American Institute of Architects, also in 1987. In 1988, he was awarded an Order of Australia for services to architecture. He is a keen painter and art collector.

This title is not yet published. It is available for purchase now and will arrive at our Sydney warehouse on or shortly after the release date listed above.

Be the first to review An Australian Garden. 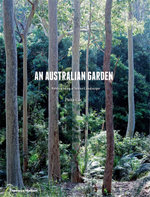 Miscellaneous items Home & Garden for Mum
Hold on while we process your request.