A heart-racing thriller from the master of adventure

A body. A cover-up. A buried secret.

Sonja Kurtz - former soldier, supposedly retired mercenary - is in Vietnam carrying out a personal revenge mission when her daughter sends a call for help.

Emma, a student archaeologist on a dig at the edge of Namibia's Etosha National Park, has discovered a body that dates back to the country's liberation war of the 1980s.

The remains of the airman, identified as Hudson Brand, are a key piece of a puzzle that will reveal the location of a modern-day buried treasure - a find people will kill for.

Sonja returns to the country of her birth to find Emma, who since her call has gone missing.

Former CIA agent Hudson Brand is very much alive and is also drawn back to Namibia to finally solve a decades-old mystery whose clues are entombed in an empty corner of the desert.

Tony Park was born in 1964 and grew up in the western suburbs of Sydney. He has worked as a newspaper reporter, a press secretary, a PR consultant and a freelance writer. He also served 34 years in the Australian Army Reserve, including six months as a public affairs officer in Afghanistan in 2002. He and his wife, Nicola, divide their time equally between Australia and southern Africa. He is the author of sixteen other African novels.

Tony Park has worked as a reporter, a press secretary, a PR consultant and a freelance writer. He is also a Major in the Australian Army Reserve and served in Afghanistan in 2002. Tony and his wife divide their time between Sydney and southern Africa where they own a home on the border of the Kruger National Park. He is the author of fifteen novels set in Africa, Far Horizon, Zambezi, African Sky, Safari, Silent Predator, Ivory, The Delta, African Dawn, Dark Heart, The Prey, The Hunter, An Empty Coast, Red Earth, The Cull, Captive and Scent of Fear, and co-author of Part of the Pride (with Kevin Richardson), War Dogs (with Shane Bryant), The Grey Man (with John Curtis) and The Lost Battlefield of Kokoda and Walking Wounded (with Brian Freeman).

Tony's latest novel, Ghosts of the Past, will be published in August 2019.

Tony is a keen supporter of several charities concerned with wildlife and people in Africa. He is a Patron of Painted Dog Conservation Inc, a charity supporting the endangered African Painted Dog. Tony welcomes the opportunity to talk about Africa, his travels, and his writing, and loves to hear from people who have read his books.

Be the first to review An Empty Coast. 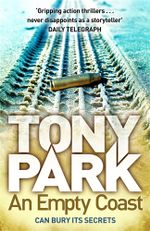