Be the first to write a review
Tweet
14%
OFF RRP  $19.99 $17.25
FROM THE AUTHOR OF THE MULTI-MILLION COPY BESTSELLING ROY GRACE SERIES, AND WINNER OF THE 2016 CRIME WRITERS' ASSOCIATION DIAMOND DAGGER PRIZE

"No one can deny James's success as a crime novelist..." Dailymail

City stockbroker Alex Rocq leads a comfortable life - with a luxury flat in London, a country cottage, a very expensive car and a lucrative job that still leaves time for leisure. But all this isn't enough. After receiving a tip-off, Alex decides to play the commodities market for himself. Except he soon learns the hard way that fortune doesn't always favour opportunity, and his luck comes to an abrupt end.

When he is offered the chance to write off his debts - in exchange for special services and silence - Alex can't believe his luck. But how far will a desperate man go to harness the unexpected forces of the power players around him?

Peter James is one of the UK's most treasured crime and thriller novelists. His Roy Grace detective novels have sold over one and a half million in the UK alone and five million worldwide in total. The series is now translated into 33 languages. He has developed a close working relationship with the Sussex Police over many years, spending an average of one day a week with them and his writing reveals a unique insight into the reality of modern day police work.

He has also carried out extensive research with police in Moscow, Munich, Paris, Melbourne, Sweden, New York and Romania, as well as attending international police conferences to ensure he is at the cutting edge of investigative police work. Peter, an established film producer and script writer, has produced numerous films, including The Merchant Of Venice, starring Al Pacino, Jeremy Irons and Joseph Fiennes.

A TV adaptation of the Roy Grace series is currently in development, with Peter overseeing all aspects, including the scriptwriting. In 2009 he was awarded an honorary doctorate by the University of Brighton in recognition of his services to literature and the community.

Peter is now a member of the Sussex Police Rape Prevention Team and writing and producing a video for them for schools and YouTube that will warn teenage girls of the potential date rape situations they could find themselves in. He did a lot of research with Lifecentre - for further information on Lifecentre visit their website at www.lifecentre.uk.com

Born and brought up in Brighton, Peter divides his time between his homes in Notting Hill, London and on the South Downs near Lewes in Sussex.

Be the first to review Billionaire. 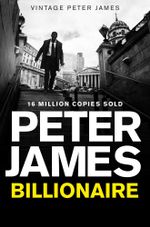