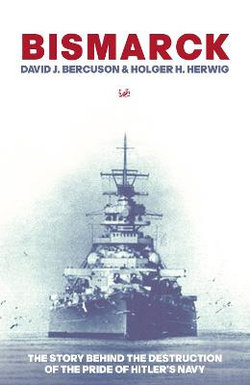 The Story Behind the Destruction of the Pride of Hitler's Navy

Late in the morning of 27 May 1941, the German battleship Bismarck was sunk by an overwhelming British armada in a fierce battle that lasted ninety minutes. Admiral Gunther Lutjens, Captain Ernst Lindemann and 2,206 men of her crew were lost, only 115 survived.

Five days earlier, an RAF reconnaissance plane flying low off the coast of Norway spotted four large warships in the sea below. At 19,000 tons fully loaded, the sight of the heavy cruiser Prinz Eugen was shocking enough; even more so was the sight of the 50,000 ton battleship Bismarck - the pride of the German navy - a ship shrouded in myth, an awesome and mysterious behemoth of destruction. Their purpose in these waters was obvious and chilling- the German navy was sending this powerful four-battleship task force to seize control of the North Atlantic sea lanes.

Noted historians Bercuson and Herwig have uncovered much new information on the Bismarck, including a close examination of classified British and United States diplomatic files, only recently opened, revealing secret diplomatic manoeuvrings between Churchill and Roosevelt. They tell the full story of the Bismarck for the first time, from the key strategic decisions of the national leaders, to the gripping hour-by-hour account of the battle. This is the definitive account of one of the most dramatic and momentous events of the Second World War.

Be the first to review Bismarck.