by Margaret Wild and Judith Rossell

Bogtrotter doesn't ever stop running, until the day he meets the frog.

Every morning Bogtrotter runs across the bog, up the bog, down the bog and around the bog until it's time to go home. Sometimes he wishes things would change, but he doesn't know how or what or why. Until one afternoon, when he picks a flower for the first time in his life ...

Margaret Wild has written more than seventy books and has been published around the world.

Her numerous awards and distinctions include the Children's Book Council of Australia Picture Book of the Year Award for Jenny Angel, illustrated by Anne Spudvilas, The Very Best of Friends, illustrated by Julie Vivas, and Fox, illustrated by Ron Brooks.

In 2008 she received the Nan Chauncy Award for an outstanding contribution to children's literature in Australia. Her book Vampyre, illustrated by Andrew Yeo, was short-listed at the 2011 Aurealis Awards.

Margaret has three titles in the Walker Classics series: Going Home and A Bit of Company, both illustrated by Wayne Harris, and Let the Celebrations Begin!, illustrated by Julie Vivas

Before beginning her career in children's books, Judith worked as a government scientist (not a mad scientist, a normal kind of scientist) and also for a cotton-spinning company (that made threads for T-shirts and denim jeans and mops and teabag strings).

Judith has written thirteen books and illustrated more than eighty. Her work has been published in the US and UK, and translated into more than twenty languages. Judith lives in Melbourne, Australia with a cat the size of a walrus.

Be the first to review Bogtrotter. 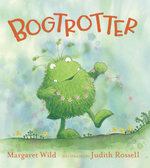 by Margaret Wild and Judith Rossell