An Inspirational Story of Self-Discovery, Survival and Hope

On 27 July 1999, 21-year-old Tiffany Johnson stared death in the face when she miraculously survived one of Switzerland's worst natural disasters, the Saxtenbach Gorge Canyoning Disaster. When a landslide and flash flood hit the Saxetenbach Gorge that day it claimed the lives of 21 young people. This horrific event sent shockwaves around the globe, making headlines as only six were pulled from the treacherous waters that day. Tiffany is one of those survivors.

Thunderous water gushed all around me. I surrendered my body as I was swept away by the ravaging floodwaters. I saw my life playing out like a series of snapshots. I knew I couldn't get to safety and so I let go...

The quintessential girl next door, Tiffany had grown up on an idyllic farm in country Australia and moved to the city to pursue her dreams. Far from home, she fell in love with the wrong man and entered a toxic relationship. Struggling with anxiety and anorexia, she fled overseas hoping to escape her demons. Stranded, broken and alone in the UK, Tiffany booked a Contiki tour in the hope she would overcome her challenges and finally find herself. Little did she know her battle was just beginning.

Poignant and enthralling, Brave Enough Now is a courageous memoir of overcoming internal conflict and trauma. Intimately penned, Tiffany's heartfelt story is one of love, friendship, self-discovery, inspiration and hope. From little girl lost to lionheart, this extraordinary memoir is unforgettable from start to end.

Be the first to review Brave Enough Now. 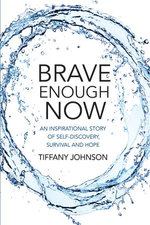