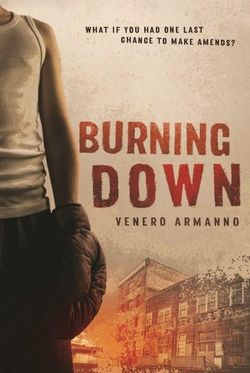 Charlie Smoke is living out his early retirement from the boxing ring as a bricklayer.

It is the mid-1970s and he believes his best days are behind him. He's lost his wife and daughter to his questionable past, but when he meets Holly Banks and her teenage son, Ricky, he has a chance to do things differently.

As an unlikely friendship develops with Ricky, Charlie is unwittingly pulled back into the gambling underworld he thought he'd left behind. In order to make a new future, first he must help settle some old scores.

Burning Down is a searing new novel from acclaimed storyteller Venero Armanno about family, regret, love and the promise of salvation.

VENERO (Veny) ARMANNO was born in Brisbane to Sicilian migrant parents. He is the author of two books of short stories and nine critically acclaimed novels.

His book Firehead was shortlisted in the 1999 Queensland Premiers Literary Award for Best Novel of the Year and The Volcano won that award in 2002. The Volcano was also shortlisted for the Courier Mail Best Book of the Year. Further back in time, My Beautiful Friend was runner-up as the Aurealis Best Horror Novel in 1996, and Jumping at the Moon was equal runner-up in the 1993 Steele Rudd Award for Best Short Story collection.

Veny’s 2007 novel, The Dirty Beat, was described as “a lovely rocking rolling swoop of a novel” (Good Reading), “bold, original and moving” (The Age), and full of “the unmistakable beat of a passionate humanity” (The Canberra Times). Then in 2012 Black Mountain was published to national critical acclaim.

His books have been published in USA, France, Germany, Switzerland, Austria, Holland, Israel and South Korea. He has travelled widely and lived for a year and a half in Paris.

Be the first to review Burning Down.