Be the first to write a review
Tweet
RRP  $17.50 $16.90
When we last saw our heroes, George and Harold, they had been turned into evil zombie nerds doomed to roam a devastated, post-apocalyptics planet for all eternity. But why, you might ask, didn't the amazing Captain Underpants save the boys from this frightening fate? Becasue Tippy Tinkletrousers and this time-travelling hijinks prevented George and Harold from creating Captain Underpants in the first place! Now, having changed the course of human history forever, they'll have to figure out a way to CHANGE IT BACK. Could this be the end for Captain Underpants?

Dav Pilkey was born on March 4th, 1966 in Cleveland, OH. His father (David, Sr.) was a steel salesman, and his mother (Barbara) was the organist at a local church. Dav's older sister (Cindy) was a highly-skilled professional tattletale.

After setting the school's all-time record for the amount of time spent in the principal's office, Dav was diagnosed with Attention Deficit Disorder and severe hyperactivity. By the start of first grade, Dav had successfully moved into the role of class clown. He was the undisputed king of funny noises, and held the classroom record for the number of crayons he could stick up his nose at one time (a record he still holds to this day).

Everybody in Dav's class thought he was pretty funny, except for one person - his teacher!

Dav's teacher didn't care for his particular brand of humor, so she began sending him out into the hallway. Before long, Dav was spending so much time in the hall that his teacher moved a little desk out there for him.

In the hallway, Dav would sit down at his desk, take out his art supplies, and start drawing. At first, he drew only pictures, but as time went on Dav began making up stories, too.

In 1984, Dav Pilkey attended Kent State University as an art major. While attending a freshman English class, one of Dav's professors complimented him on his creative writing skills, and encouraged him to write books. Dav thought this was a novel idea, and began working on his first children's book.

Dav learned about a contest for students who write and illustrate their own books. The winners got their books published! So Dav began creating his first book, World War Won, and entered it in The National Written and Illustrated By...Awards Contest for Students. Within a year, Dav had won the contest and was flying to Kansas City, Missouri to meet the editors and publishers at Landmark Editions, Inc.

Shortly after the publication of World War Won, Dav moved back to Kent, Ohio where he wrote and illustrated many more books. During this time, Dav found a cute stray puppy and named her 'Little Dog'. She soon became his best friend.

In 1990, Dav dreamed one night that he was supposed to move to Oregon, so a couple of years later, he and Little Dog headed out West.

In 1999, Dav and Little Dog moved to a small island in Washington. Dav and Little Dog enjoyed taking long walks on the beach, and sometimes they even went kayaking together. But their favorite thing of all was to walk down the street to the island’s local sushi restaurant. Dav was the only customer in the restaurant who had special permission to bring his dog in with him. As Dav would eat yummy vegetarian sushi rolls, Little Dog would sit under his table and eat her own meal (a chicken dinner that the restaurant’s owner, Sayuri, prepared especially for her).

After a few years, Dav and Sayuri (pronounced Sy-you-dee) fell deeply in love and were married on the beach under a full moon in 2005.

Currently, Dav is working hard on a set of epic novels based on the Captain Underpants comic books he wrote in elementary school while sitting out in the hallway.

Be the first to review Captain Underpants: #10 Revenge of the Radioactive Robo-Boxers. 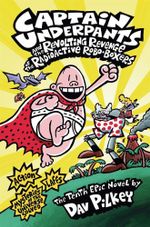