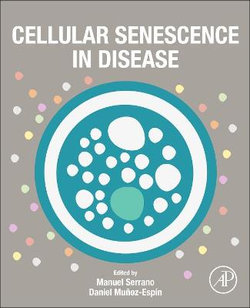 Research in the field of senescence has boomed recently due to the gradual realization that senescent cells are associated with a significant number of diseases. The genetic or pharmacological elimination of senescent cells can cause widespread benefits and improves outcomes for most of those diseases. Cellular Senescence in Diseases presents an updated review of the role of cellular senescence in multiple pathologies. Focus is given to those diseases where the implication of senescence has been more extensively documented, such as (cancer, lung and liver diseases, diabetes, Neurodegenerative diseases and others).

The Editors recruited a group of worldwide experts in each individual pathology to review the role of cellular senescence in each one of them, aiming at identifying potential therapeutic pathways. The first two chapters provide an overview of the cellular senescence principles. Next, the chapters are divided into specific diseases. Cancer, including premalignant lesions (OIS), Advanced disease (TIS), and Metastasis are covered. The following condition covered is Lund diseases, including IPF, COPD, and Pulmonary Hypertension. Next Liver Diseases are covered, including Fibrosis and Cirrhosis, and Fatty liver disease. Next there is coverage for Kidney implications, including fibrosis and transplantation. Vascular diseases are covered next including infarction and hear fibrosis, and atherosclerosis. Both diabetes types 1 and 2 are covered next. Following chapters cover Obesity, Sarcopenia, and Bone and Cartilage disorders, respectively. Neurodegenerative diseases are covered next, focusing on Alzheimer and Parkinson. The next chapter discusses accumulation of senescent cell in tissues during aging. The two final chapters cover current developments and conclusions.

Cellular Senescence in Diseases is designed for researchers and clinicians with a focus on the cellular mechanisms of diseases.&nbsp; All chapters cover current experimental therapeutic approaches to eliminate or cancel the pathological effects of senescent cells.&nbsp; Pharmaceutical scientists may also benefit from the contents of the book in the exploration of novel therapeutic opportunities

Be the first to review Cellular Senescence in Disease.

by Manuel Serrano and Daniel Munos