China and the New Maoists

Forty years after his death, Mao remains a totemic, if divisive, figure in contemporary China. He retains an immense symbolic importance within China's national mythology even though the rise of a capitalist economy has seen the ruling class become increasingly ambivalent and contradictory in their attitudes towards him and his legacy. Despite his highly visible presence in Chinese public life, however, his enduring influence has so far been little understood in the West.

In China and the New Maoists, the authors seek to change that, by closely examining the vocal figures in China today who claim to be the true ideological heirs to Mao, from academics to activists. They also explore efforts by the state to draw on Mao's image as a source of legitimacy even as the state attempts to control and sanitize his influence. Featuring interviews with many key proponents of the new Maoism movement, including those involved in the rise of cyber-activism and the wider protest movement in China, China and the New Maoists provides an insightful, on-the-ground look at the current social and ideological pulse of China.

The battle for Mao's historical legacy will likely play a crucial role in determining China's political future, and this book provides a fascinating portrait of a country undergoing dramatic upheavals while still struggling to come to terms with its past.

Be the first to review China and the New Maoists. 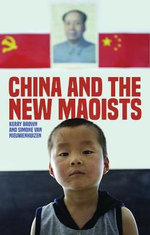 China and the New Maoists