Six interlocking lives - one amazing adventure. In a narrative that circles the globe and reaches from the 19th century to a post-apocalyptic future, Cloud Atlas erases the boundaries of time, genre and language to offer an enthralling vision of humanity's will to power, and where it will lead us.

David Mitchell is a comedian, actor, writer and the polysyllabic member of Mitchell and Webb.

He won BAFTAs for Peep Show and That Mitchell and Webb Look, and has also starred in Jam and Jerusalem, Ambassadors, Back and as Will Shakespeare in Ben Elton's Upstart Crow.

He writes for the Observer, chairs The Unbelievable Truth, is a team captain on Would I Lie To You?, can't drive and co-owns a house. 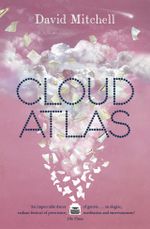